back to search results

July 24, 2010. Laying down the soil for the final preparations of the planting beds at the Venice Community Garden. The 2 foot deep beds are layered with 3 inches of rocks as a buffer between the roots and the bad soil below, but will still allow water to drain. White Gypsum powder is spread on top of the rocks and then watered to break down the soil particles and hard clay below for better drainage and to enable aeration by worms and microorganisms. Plastic sheeting is stapled around the sides of the beds to keep toxins (such as the arsenic and lead found in the soil samples), to leach into the soil during rains. Weed cloth is then stapled around the beds to prevent the roots from tearing a hole in the plastic sheeting and accessing the toxic soil on the outside. For the planting soil, a 50/50 mix of organic matter and city compost is layered on top of the rocks, and beds are now ready for planting. The Venice Garden broke ground in April, 2010. Soil tests revealed high levels of arsenic and lead because of previous uses which included a railroad line going through the lot. Steps were taken which included adding protective layers and adding new soil. Planting began in August and the first harvest was in October, 2010. Venice, California, USA 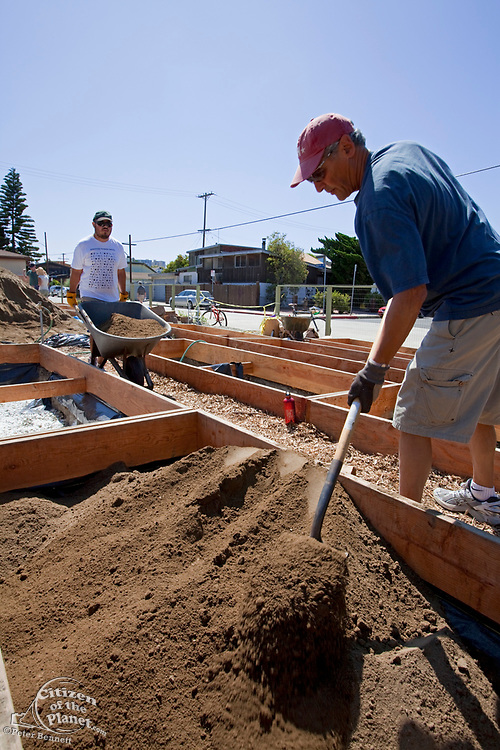